Reception given to Cdr. Vijay Varma 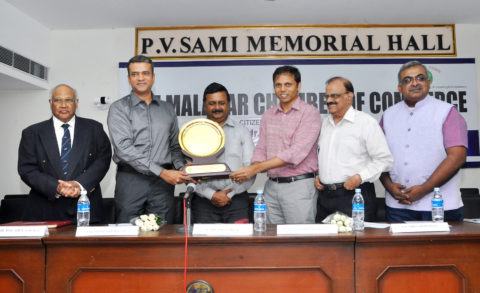 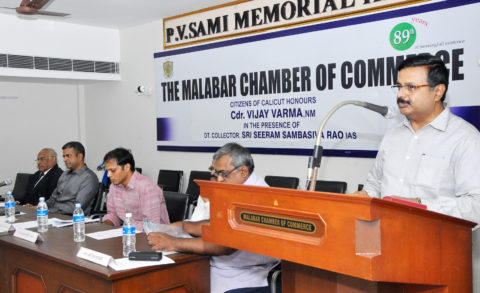 President Sri. A. Shyam Sunder chaired the meeting and welcomed the gathering. He said that we have gathered here to honour a man par excellence, a man of valour, who have saved many lives during the recent devastating floods. But for the bravery of Cdr. Vijay Varma and others and the fishermen of Kerala, the death toll would have increased considerably.

Dt. Collector Sri. Seeram Sambasiva Rao IAS., District Collector said that he felt very happy to associate with the function of honouring one of the National Heros. Here there are many heros who have served the Nation and has rescued very many human beings during the recent  Kerala floods and I feel privileged and elated to hand over the memento to Cdr. Vijay Varma. I am happy that Malabar Chamber of Commerce has come out to give a reception to our Hero Cdr. Vijay Varma.

CA C Mohan Past President of our Chamber adorned the ponnada on Cdr. Vijay Varma.

Brigadier Gandharan said that he felt very proud in felicitating Cdr. Vijay Varma. In the case of pilots have to take quick decisions. This can be wrong also. But the experience and with in born qualities, most of the decisions taken will be correct. There are many officers who are natives of Calicut who had done many Chivalrous  deeds. But most of them were during wars and other connected operations, which need not reach media.

Cdr. Vijay Varma in his reply speech said that he felt that he had done a small thing only which can be considered part of his duty, while there are many people who had done very many chivalrous deeds, many fold greater than that he had done. But have not reached media or was given less prominence in media. During such acts, some of the heroes sitting in front of me had lost their dear and near. I am very proud to be the son of a very brave soldier and my mother was the force behind me for all my deeds. I had been a pilot for the last 20 years and I thank one and all who had supported  me.

The function came to an end with the recitation of National Anthem.